We’ve done lots of work on random encounters this week and it’s getting pretty exciting running across all these little anomalies in the universe– a group of bandits, a lonely house in the woods, cultists, people wearing silly hats. :O There’s sort of an…Elder Scrolls feel to random encounters. Here’s a few screenshots from one I stumbled across earlier this evening.

Sapfinger the Randomly Generated Floran had just landed on Alpha R CRB 249 II (catchy name) and was searching for new and exciting things to stab when she came upon exactly what she was looking for. A cultist! And an ape that looked a little bit like that guy from that one David Lynch film! Today was truly her lucky day. 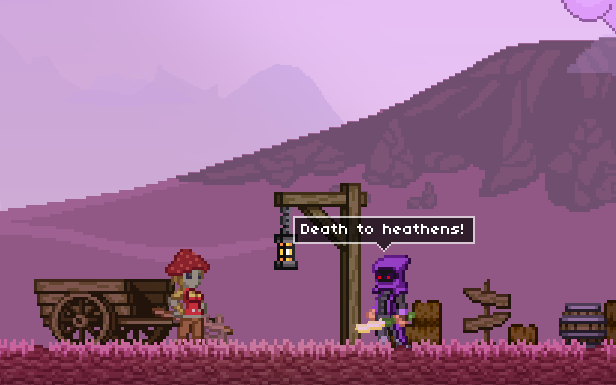 “Death to heathens!” The cultist cried out as Sapfinger approached, which Sapfinger found pretty rude considering they’d only just met. Sapfinger sighed, mildly annoyed with the state of the universe. “You know, we’re living in a society here!” she was sorely tempted to respond, but instead she just stabbed, and the cultist was no more.

We also managed to quickly implement fire. Y’know, the actual burny, destructive sort of fire. Look at it go!

Well, he’s finally actually in-game, too, as you might’ve noticed from one of Tiy’s tweets on Tuesday.

All in all great progress this week. :D Goodnight!