I’ve spent the past few days digging into the quest system, fixing a few annoyances and adding some new capabilities that will be used for the progression. The most obvious new feature is the ability for NPCs to offer quests: 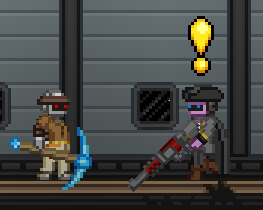 This was a bit more involved than I’d hoped since it required making some quest data available to the client which had previously been accessible only on the server, but it should be important groundwork for other future improvements. In addition to quests being offered by NPCs, I also added quest prerequisites, so that we can create quest chains in which quests only become available after the player has completed certain requirements. Next I’ll be cleaning up some of the simple issues with the quest manager, then getting back to work on monsters.