Sundays are relatively slow days at Chucklefish, we all work such silly long hours during the  rest of the week, Sunday is our chance to get some chores done outside of the game.

That said we still put a bunch of hours in. Sunday is also our day in which we experiment with adding things to the game that might not be in the beta, or even the final game. Little side projects that aren’t on the todo list and can only be completed on following Sundays.

I took that opportunity today to experiment with space stations. The idea being that once you are pretty far into the game you’ll be able to register an organisation/guild that will get its own spacestation.

Think ‘Guild Hall’ in an MMO. 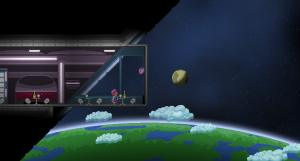 I added our old Spacestation to the game as a test (we had spacestations early on and switched them out for personal/upgrade-able ships.)

Exploring this huge structure was massively atmospheric and made me pretty positive about the idea.

So that was my Sunday experiment.

The rest of the team continue to work on those big multiday tasks, so not a huge amount to report there. Though Kyren and Bartwe have made big progress on theirs and I might be able to show some stuff off from that tomorrow or the day after.

Hope you had a good weekend guys