Today was one of those dreadful days in which I had to take care of a ton of business shenanigans. Accounts and lawyers that sort of thing.

Luckily though, whilst my soul was being destroyed the rest of the team continue to make progress.

Rho completed the last of the respawn animations. I don’t think I’m going to show any more. We should at least leave a couple as a surprise no?

Kyren continues to work on Humanoid npcs, they need to be quite smart and encompass a lot of different behaviours, so she’s probably going to be on that for a few days yet.

Omni has nearly entirely finished the 3D printer system, which is a really nifty thing to have access to (especially with an admin client, print anything in the game for free! Yay!).

Bartwe has finished up all the base work for status effects. Enemies now use the same damage system as the player, so anything we come up with can be applied to both. Next on the agenda is poison, burning and bleeding.

George and our wonderful contributors are still tackling the huge number of ore based melee weapons and isn’t too far off completing them now. Some of these are ridiculously cool. 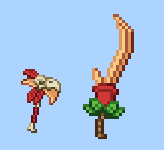 Can you guess which races these two weapons are from?

Legris is still working away at the intro sequences between work on biomes.

We also got the wonderful Logan Cunningham of Bastion fame on board for the voice acting. The samples he sent today were incredible.