Happy Independence Day to you Americans out there.

We’re still working on bits and pieces that play into the progression system. This is going to be a running theme for a while as we get it sorted out.

Kyren is now fully moved and is back to programming. Right now she’s writing a small piece of code that will allow us to play around with leveling curves and get everything exactly as it should be. It’s a process that’s going to require a lot of tweaking and testing but once it’s out of the way it’ll be glorious.

We’ve also finished up the design of the quest screens. You can see a mockup here:

These will be implemented once Bartwe is done with some deep level voodoo.

Also, because yesterday’s post was so controversial. Here’s another image from the Floran intro. 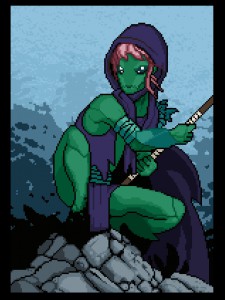