So for the most part work continued on NPCs today. The Glitch village is now entirely finished. Stephen has done a wonderful job populating it with farms, Inns, shops, wells, signs, etc

The NPCs got another brain boost. NPCs will now approach eachother and ‘silently chat’. Meaning you’ll see their lips move and youll see them emote to each other. They’re also aware of the time of day, so they’ll head out during the day, they tend to stay in at night and sleep. Their path finding has improved again, they have names and will sometimes call each other by name. Villagers will egg on the guards as they attack you, they’ll look for safety when attacked and react when they feel they’ve escaped. Villagers that see you attack another villager will call the guards. 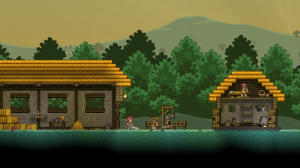 The next step is getting NPC shops and quest givers working. These NPCs can also be used to produce travelers and wandering merchants.

Here’s a silly sped up gif: