Today we’ve been focusing on getting the battle music working just right, fading it in when the action ramps up and fading it out again seamlessly when things get a little calmer. It’s a nightmare of tweaking to get right but the end affect is one we think you’ll be really happy with.

The tutorial quest line has been more or less finished. It’s entirely optional but it gives you a good idea of how to play the game should you be new to sandbox titles.

The last of the ore distribution changes are complete.

Aside from some finishing touches on the battle music, the music changes are complete.

We’re working on humanoid NPC behaviours now, the way they chat with the player and react to each other.

We’re also looking to get the party interface completed soon, here’s a mockup of that: 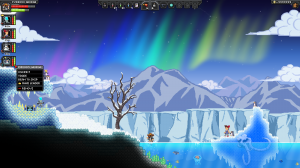