So yesterday I said we’d make speech bubbles prettier. We worked on it and now they look more or less like this: 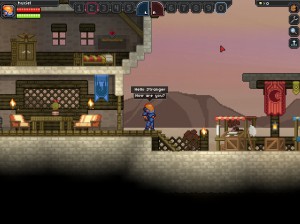 We’ve also been working on NPCs, giving them new behaviors and making them all around much smarter and more interesting.

NPCs spawn really nicely now too. They spawn in packs that looks very natural. More importantly they know where they shouldn’t spawn.

We’ve also been working on getting the ship upgrades to work nice and seamlessly so you don’t need to reorder any of your decoration when upgrading.