So, most of the mob spawning bugs are worked out, finally.  NPCs spawn in clusters that are far apart, and don’t tend to spawn in undesirable spots anymore or on top of each other.  Mobs are de-spawned properly if no players are nearby, and mobs are spawned only if there is enough room in a given region to place them all.  There were some bugs left that caused NPCs to be de-spawned in certain cases while still on screen, and those have been fixed.  So that’s good!

The next stage for NPCs at this point, which I’m working on at the moment, is fixing some of the behavioral problems they have.  They tend to be a little too determined to try and reach their goal (to attack a player), and they need to have way better detection for when this is just not possible and they need to get bored and wander off a little faster.  There are also plenty of general navigation bugs and limitations that remain, and hopefully a good chunk of these can be fixed by tomorrow.  I’m hopeful!

Omni and Rho are working on a fun little UI animation  for ship travel that will give UI feedback for when the ship is currently flying and can’t be controlled, but more importantly looks really cool!  Hopefully we can post a video of it tomorrow, but for now here’s a pretty terrible screenshot of it: 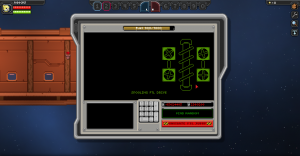 Bart has finished some lighting changes for nametags and object highlighting that makes them a bit smarter about the surrounding light level, and it looks really nice now!

Another change we’re working on right now is putting the actual mod loading mechanics in!   This is the part of the code that will scan additional asset directories and handle the load order for them, and load assets from them instead of the base assets directory.  This also includes the addition of “packed” asset files, which should make startup times on real distributed versions of the game much much faster than the in-dev versions, because packing the assets folder means a whole lot less filesystem access, and we can add indexes that make everything much easier to load.  Also it’s a lot simpler for people to manage.

In non-starbound related news, I have just recently recovered from what I can only assume to be the flu, and I do not recommend it.  However, good news is that I finally have new glasses to replace my broken ones!   I can see the text on my monitor again!  BEHOLD: 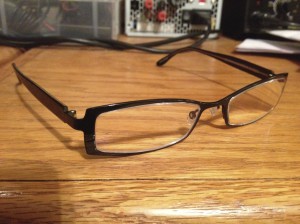 Now that I can see again, coding should be slightly less challenging!