So the great recipe undertaking is still underway, I managed to do over 800 today but there’s still a lot more to be done.

I’m hoping to have the recipes finished before next week. Fingers crossed. 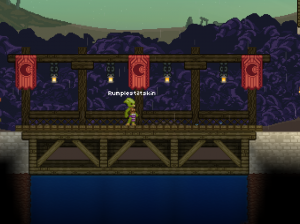 When a player appears on your screen, their name tag is shown for around 5 seconds before fading out. Name tags won’t be displayed for players who appear on screen in the dark. So you can still be sneaky.

We’ve also added a status button (alt), holding down the status button displays everyone’s nametag regardless of how long they’ve been on screen. It also causes all interactive objects in the world to flash.

Here’s an ugly gif of that. In game it’s a nice smooth pulse.

We’re also working on the 3D printing interface, which is very similar to the crafting interface but you’re also able to “scan in” items to reverse engineer them. Almost any object you find in the world can be scanned/reverse engineered to allow you to print it using ‘pixels’. However, anything you make with a 3D printer will be marked as “printed” and will have a much lower value. If you want authentic gear you’ll have to find it. 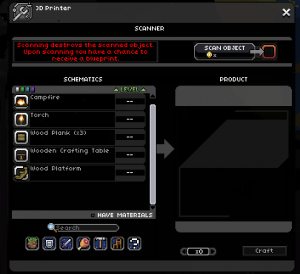 We’re also revamping the way mobs spawn, giving them herds/groups and making sure they don’t spawn in undesirable spots.