A busy one today.

A lot of work has gone into combat, particularly with the way monsters react to damage and shields. They now clash with your shield with a satisfying bump. It’s also possible to stun an NPC with your shield to give you time to counter attack.

Kyren is still working on the leveling database, she expects a big chunk of it to be finished by tomorrow morning.

Planets now have different lighting depending on the kind of star they orbit and their proximity to it.

Here’s a planet VERY close to a red dwarf:

I think we might need to tone it down a little :P

A bunch of cool new items were added, making good use of the addition of the throwable item system. 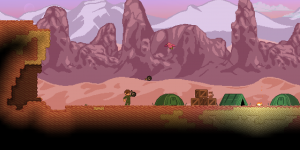 We’ve begun adding bows which are going to be specifically used for hunting early on in the game.

Right now they’re using the gun system so they’re a bit ugly. But we’ll improve them.

and a bazillion more tweaks and refinements.