Stop with the crafting window already!

I know I know, another update on crafting. But these things take time to complete.

But complete it we have! 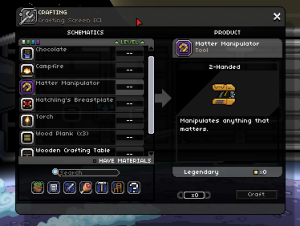 We now have a fully polished crafting window. The icons below the schematics list filter recipes based on category and the little blocks of colour on the top left can filter recipes on rarity.

It’s really nice to have this complete, now all I need to do is write a few thousand recipe files and crafting will be done!

Our artists have begun work on monster evolutions. You’ll only be able to catch baby creatures, so youll need to look after your creature if you’d like an adult. Though adults will appear in the wild.

Kyren has finished her big important technical change. There’s not much to show there from an end users perspective, but it’s very important. She’s now working on finishing up NPC behaviour. You can now only knock an NPC back with an attack if the attack depletes more than 40% of the NPC’s healthbar. We’re going to be focusing closely on exactly how NPCs spawn and their path finding behaviour.

Omni will soon be moving onto other UI / Hud style elements. We have an interesting nametag/visual chat system coming, as well as a way to highlight all interactive items on the screen.

Roll on tuesday (this doesn’t mean a beta will be released on tuesday!!!)