Hey guys, another double-update for you! I apologize for the tardiness on these posts, but rest assured everyone has been very busy working and a lot of really great stuff has made its way into the game these past couple of days. Of course more unique dungeon NPCs have been thrown into the mix, with some really cool AI behaviours being hammered out by the ever-talented Jordo. We now have NPCs that can chatter to themselves (right now for instance, they say “open sesame” when they open doors) and we’re very close to having them deliver dialogue when interacted with. The rest of our coders have been making sweeping optimizations under the hood, improving a lot of functionality that was lacking in places, all in the name of making a better (and more mod-friendly) game.

The wire system in particular that was put on the backburner a few months ago is finally getting some much-needed attention. While previously you could rig up doors to switches and it would work well enough, there were a handful of very specific functions I was still waiting on. One really cool addition in particular is that we can now attach wires to objects with AI like automated turrets and security cameras. This paves the way for things like alarms going off when a camera spots you, summoning more enemies, and locking you in until the alarm is stopped! Soon I should be able to start really going to town with some trap and puzzle orientated setups (there’s are a couple of dungeons I’ve specifically avoided starting on until these functions were ready).

As per usual, this past week I’ve mostly busied myself with this work on the dungeons. I’ve pretty much wrapped up on the prison for now, though I’ll likely come back to it after we launch the beta to add more content and expand it further (it’s already pretty big). It’s been interesting to tackle an inherently darker dungeon like this one, and I’ve occasionally surprised myself with the results I can get with creative use of just a handful of different block types. 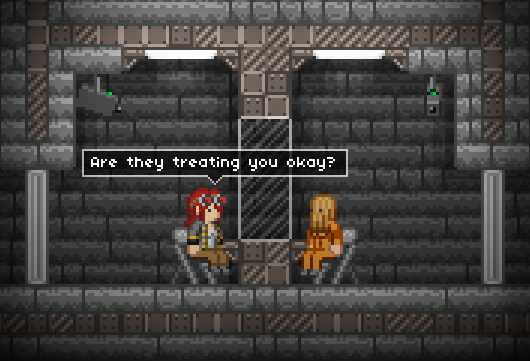 I’ve long appreciated games that can tell the player a story purely through the design of the environment itself. Games like Bioshock and Half-Life 2 are still firmly in my mind as two of the greatest examples of this craft, and I’ve tried my best to imbue my work with this same kind of magic. Obviously there are limitations I have to deal with, I certainly couldn’t create something with that amount of detail in a retro-styled game like ours, but I’m hoping that when players will happen upon one of the prison blocks in this dungeon, they’ll be able to look at the contents of every cell and piece together just what kinds of people were kept in each one. 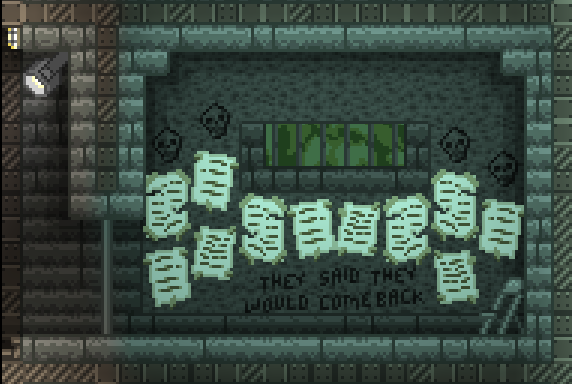 Thank you for your continued patience guys! I realize the tensions are high as many in our community are keen to play the game right now, but rest assured we’re doing everything we can to get the game into your hands in a truly enjoyable state as soon as possible! We’re continually humbled by the sheer amount of passion and eagerness on display from our community, and we’re very fortunate to have you with us! Please bear with us a bit longer!