Today we’ve focused a lot on adding a bunch of the enemies our artists have been creating to dungeons, adding unique behaviors/AI, and configuring loot pools. Hooray, loot!

We’ve also continued working on friendly NPC AI, with NPCs becoming gradually less stupid as we go. Now NPCs will say different things depending on your species, jump over little gaps in terrain, turn around when they’re walking into walls, using emotes, etc. Y’know, the important things. Maybe someday soon they will actually become self-aware and when that happens…well… *shudder* 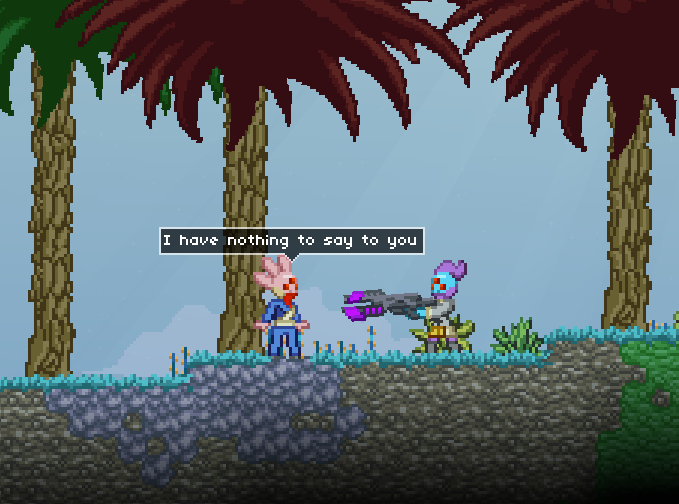 Although…this guy’s got nothing to say to me. Think it might have something to do with the gun?

Obviously, crude toilet humor isn’t for everyone. We don’t expect everyone to agree that a giant walking sewage golem is hilarious, and we don’t plan on adding more poop-based enemies. :P

Starbound’s not an overly serious game, though. It’s got elements of serious storytelling and the opportunity for serious roleplay, but overall it’s meant to be entertaining, and we like throwing in some humor where we can! Usually it’s a little bit more subtle, but hey. Sewage monster kind of fits in with a sewer-themed dungeon. Sorry if that’s not your thing! I believe we’ve got enough serious-business intimidating monsters to make up for it. :)