October 28th – All the small things!

G’day folks! Today I’ve taken a bit of a break away from getting more of the new biome weapons and drops working, in favor of working on a number of smaller things that I’ve needed to give some attention to for a while now.

Many of the game’s trap objects were broken when the status system overhaul hit, resulting in players no longer taking damage. Some of these objects were already a bit broken to begin with (electric-sounding instakill wooden spikes, anyone?) so I gave the traps we had a bit more TLC today.

Now their damage levels are a bit more reasonable across the board (though they could still be subject to change down the line), they make more appropriate sounds when you hit them, and what was probably most time-consuming was fixing all their hitboxes to more accurately reflect the areas that are actually dangerous, including when they are flipped. 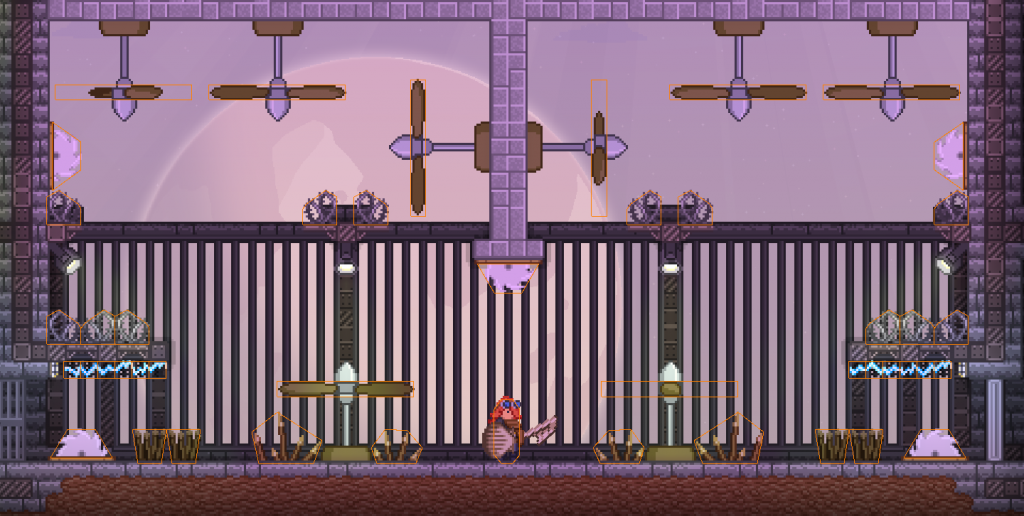 Previously most had their hitboxes generated automatically, often extending into empty space around the object that should have been safe for the player. It’s one of those subtler details that one would rarely think about when playing games (unless they’re done poorly), but it’s pretty important to get right when you’re the one making them.

As a small aside, those of you more familiar with the game’s objects may have noticed that the propeller can be placed on walls and ceilings now. The more I looked at it, I figured it would be nice for the airship-enthusiasts in our player base to have more options. The spinning propellers are still dangerous though, so be careful where you place them!

I also did a little tidying with the interface to make sure all the new status effects were displaying the appropriate graphics when inflicted upon the player.

In a bit of more exciting news, Metadept has pretty much wrapped up work on the shield generator for our dungeons (which I spent some time testing today). Essentially these generators will exist somewhere within the dungeons, restricting the player’s ability to build, place, break and wire objects within that space. That is until the player locates the generator and disables it. This will mean players can no longer circumvent all obstacles by building across or digging through them unless they’ve already been lucky enough to find the shield generator before-hand.

Setting up the existing dungeons with this new functionality will likely be my focus for the next few days. This will mean creating shield generator rooms for each one and getting them to spawn reliably. This can sometimes be difficult when you want to have them appearing in randomized locations (and preferably some distance from the entrance).

If things go the way I’d like, it’s my intent that each shield generator should have some form of obstacle to make shutting the generator off challenging or risky in some way. This could be as simple as the generator being locked behind doors that are only able to be opened from elsewhere in the dungeon, some strong enemies might be guarding it, maybe a little tricky platforming and problem-solving, or perhaps a combination of all of the above.

That’s it from me, good night folks!