So I started work on adding shield generators to the existing dungeons at the end of last week. I’ve gotten a few done so far. Some have been relatively easy to handle, chiefly the dungeons that already had places naturally suited to the addition of a shield generator, with appropriate obstacles in place.

Others have involved a bit more work. With our dungeons now having wire functionality, I was able to do a lot of the stuff I’d wanted to do with the Apex test chamber dungeon since I first started it.

To give a better idea of what you’re looking at in the video, the player entering the facility will need to power things back up before they can progress any further. There is now a shield generator, but you aren’t going to be able to get to it at first. Two sets of doors restrict your access and you’re going to have to find the two switches that open them. Each switch opens one layer of doors. Only when you’ve activated both will the shield generator be exposed to you.

Presently in our nightly the shield generator just gets turned on and off by player interaction, but the intent is that you will have to smash them yourself. Once the generator is disabled you gain access to one last reward room where you might find something quite nice inside! Disabling the generator also restores the player’s ability to take the dungeon’s objects and blocks, as well as their ability to place blocks inside it.

This all is fairly simple when you describe it, but making it actually work has been a bit of a nightmare, since I have wires that appear in different rooms in random locations so I had to wrap my head around how best to use the logic gates, which I’m still relatively new to using. I had to make sure the brushes worked dungeon-wide and the pieces that were needed always appeared. I mean, take a look at this! 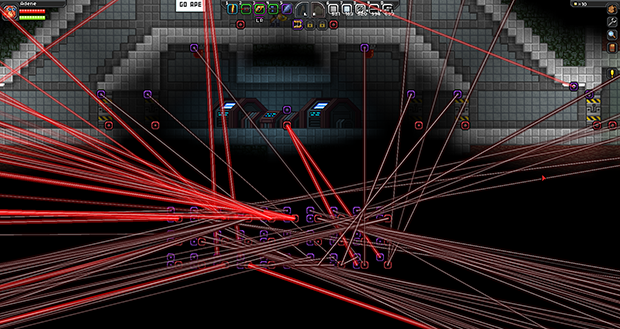 There’s still some functionality I’ll need before I can truly finish the dungeon as I originally envisioned, chiefly the ability to have traps and hazards controlled by wires. I ideally wanted the teslaspikes to only turn on when the player walks into the room (so you don’t know what the room is like until you get there), and to turn off when the switch at the end of each path is thrown (so you can travel back to the entrance in relative safety). I’ve already worked out precisely how I’m going to do this when the trap wiring functionality is added, but as this is more of a polish thing, its going to have to wait for now.

It’s been fascinating to see how something as simple as having a light turn on and off under specific circumstances can be incredibly involved. Still, it’s great to have this kind of control over the wiring system now. I don’t expect every dungeon will receive this treatment but I thought you might find it interesting to see how I’m using it so far. For now I’ll continue to update the other dungeons with our shield generators.