So I thought I’d fill you in on some of the proposed monster changes so we can have a discussion in a similar fashion to the weapon changes.

So first off we’re going to remove knockback on monsters.

Whilst removing knockback makes little sense in the current combat climate. When coupled with additional changes we’re hoping it will lead to more timing based combat and less standing and mashing swing fast enough to knock all the monsters away.

The next change will be to the way monsters try to approach players. Rather than attempting to occupy the same space as the player, they will now aim to move to a position in front of a player. That we’re calling the “attack position”

On the left you have the old behaviour, where a monster would try it’s best to get as close to the player as possible. Doing damage through touch. On the right you have the monster moving to it’s new attack position where it will eventually lunge forwards in an attack animation into the players space. We’re considering removing touch damage on monsters to assist in this change.

Monsters in the attack position will attack the player after a windup animation, warning the player an attack is coming. Coupled with the removal of knockback, this means the player will have to dodge or block enemy attacks whilst moving into range to deal damage. Blocking is also being reworked.

Rather than shields having a somewhat complex means of mitigating damage. Shields will now have an amount of “health” as one of their stats. When the player blocks an attack with a shield a health indicator will appear above the players head.

Blocking during a monster attack will also cause the monster to be knocked down and stunned for a moment, giving you time to counter attack!

Shield health will regenerate quickly over time. However if your shields health is fully depleted your guard will be temporarily broken and you won’t be able to use the shield until it’s regenerated all the way back to full health. 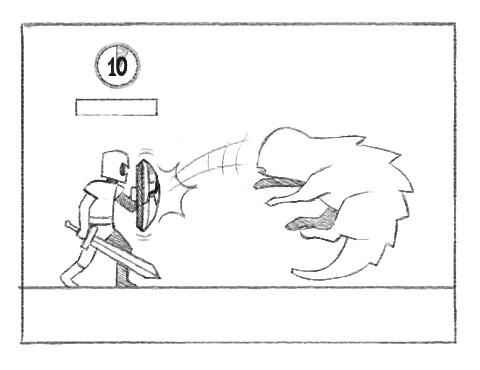 It will still block the attack that breaks it however.

Blocking at the very last moment before an attack will cause a “shield parry”. In this case you will block the attack but your shield won’t take any damage.

It will also be possible to parry attacks with two handed weapons. However, unlike shields the player won’t be able to hold down the block button to ensure they block an attack, instead they *must* time it correctly or they will be hit. 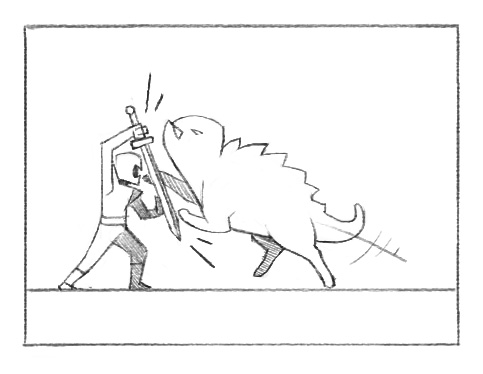 A parry with a two handed weapon will also cause a stun.

We’re also working on a vast range of skills and attacks for monsters to utilise. Each will have it’s own attack position that the monster will want to move into.

Some monsters will attack faster than others, and combat will be far more reactionary and active.

Let us know what you think