Kyren and I have been working on debugging and configuring the new monster spawning system, and I’m happy to say that it’s starting to behave quite nicely. The biggest change from the previous system is that the set of monster ‘families’ that will spawn in an area are now specific to each biome. This gives the biomes a much more unique feel and is important groundwork for some planned features such as making monster palettes match their biome, and giving them immunity to poison or lava when they’re spawned in a biome containing those liquids.

The other major change is that the target density of each monster family can now be individually adjusted, so we have much better control of which monsters are common and which are rare. This is particularly important for monsters like birds that can be annoying if they appear too frequently. There are a few other changes we’re considering, but the basic implementation is now configured, so naturally occurring monsters are back in the nightly. Which is nice, because I was starting to feel a bit lonely out there in space. 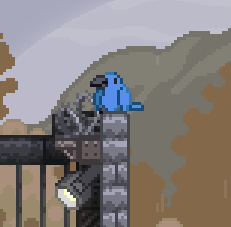 Hey there, little bird. It’s good to see you.