A quick update of what we’ve been working on this week.

First off we got all of the craftable (non-procedurally generated) armors finished up and in game. That’s 60 armors so far, not including costumes and clothing.

Every single one of these armors can be dyed a large number of different colours: 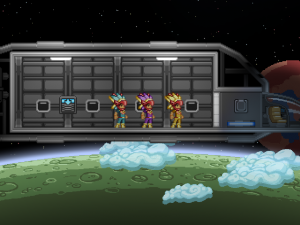 We’ve also got planets appearing in space/the night sky now, as you can see in the screenshot above. These planets reflect the solar system you’re currently in. 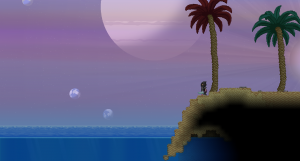 This week we’ve also got shields working, we’re still tweaking them but at the moment they can be equipped in either your left or right hand (or both if you’re that way inclined). Holding a shield up will highly raise your armor level when projectiles or enemies hit the shield. Holding your shield up also stops your energy from regenerating and blocking attacks costs energy. The next step here is to load in art and special stats so we can get the game generating a large number of unique shields. 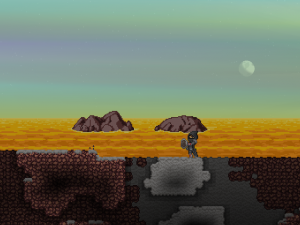 We’ve also added a new style of biome, the frozen ocean biome is a cold biome full of deep water and small islands of ice. 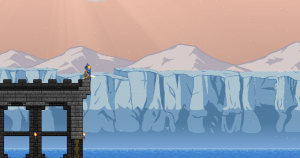 We’ve continued to work on the glitch Castles, giving them new layouts, rooms to mix up and decoration. 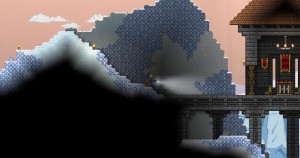 We’ve also continued to improve the space travel animation and feel, added new weaponry, added new NPC behaviour, fixed some netcode issues that popped up, produced some new tracks for the soundtrack and a whole bunch of smaller bits and pieces.

I know some of you are eager to see this sort of thing appear on the roadmap, we will update it soon, we’re just deeply entrenched in our work at the moment. We’re going to try to update it around once a month.