Just a short one today.

We’re at that stage of development now where almost every major feature is done (save for quests, but they’re not far away).

So each day we’re making use of those features and throwing in tons of content. Today was no exception.

We threw in a whole bunch of new items and furniture. We’re making sure each mini biome gets a set of unique items and fun stuff and we completed two of those today.

We also made the background planets a higher resolution so the big ones are no longer blocky (as you might ave seen in some screenshots).

Bartwe is in the process of getting the first quests appearing, which is very exciting.

Kyren is working on something realllly cool, but that won’t be done until *at least* tomorrow. If it is done tomorrow I might show you guys a short video.

Here’s a screenshot of the higher res planets. 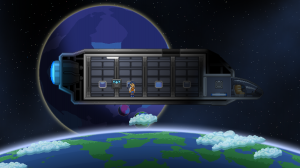 EDIT: Also! We’re going to be at Multiplay’s Insomnia Gaming Festival in the UK at the end of August! Here’s a list of events so you’ll know where to find us. Events are subject to change up a bit, though!