Welcome to the update, ladies and gentlemen.  My name is Omni, I’ll be your guide for today.

Once upon a time earlier today, I spent several hours resolving a bug where certain object items would not scan.  And although I could reproduce the issue, it was strange that sometimes I’d scan the same item and it would work.  Eventually, working together with Tiy, we stumbled across the actual problem.  It was a difference in the metadata.  A empty Variant and a Variant containing an empty VariantMap are two different things.  And items spawned by different parts of the code were spawned in very subtly different ways.  I spent a good  solid 9 hours working on this issue before I hit on that, so my total committed code output for today was 9 lines added, 13 removed.  Whoo.  I’m also in the middle of making money a thing with scanning items and connecting that to the UI.  But that will have to be finished tomorrow because that one bug killed me today.

Kyren is going through and cleaning up some of our core code to be less easy to screw up.  Because she wound up running into some bugs that revolved around references to objects living longer that the objects themselves.  And our core code shouldn’t be that easy to shoot yourself in the foot like that.  So she’s updating some of the older code to be both a) more efficient and b) less brittle.  So that’s pretty awesome.  She also put clothes on those poor, poor NPCs.

Bartwe is also going through the core code and tuning performance.  He’s modifying some of the hotter string functions and various other things to avoid unnecessary copies.  He also troubleshot a problem that involved SDL lying about the true size of the window :O

Anyways, now that the NPCs have covered their shameful nudity, I can show you a picture of a bunch of NPCs walking around.  Here they are, just derping right along. 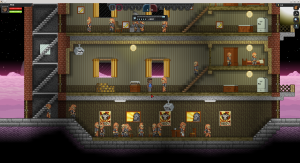 Tomorrow, kyren’s wife is going to go to New Orleans, I think she’s dragging kyren along with her.  So she might be out of commission.  I’ll be gone Sunday, spending time with the old man.  I’m unsure what everyone else’s plans are for Father’s Day weekend.  How about you guys?  What are you planning on doing if anything?