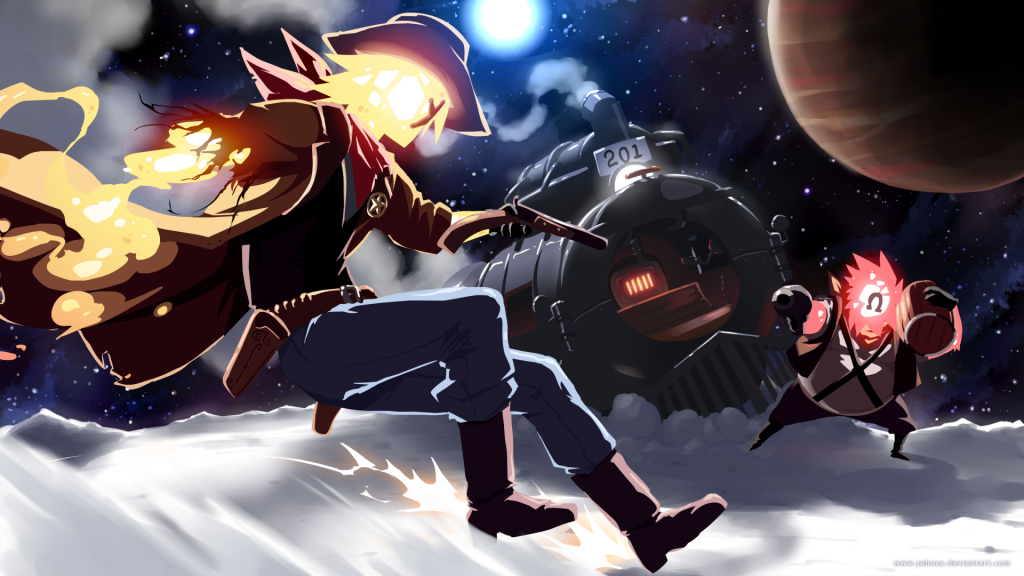 Forged aeons ago in the fusion furnaces of a now-dead star, the Novakids are a perfect example of nature’s emergent beauty. These creatures, described by a human astronomer as “interstellar gas-bag people”, have no known single origin point: that information is long lost, as the Novakids have little to no desire to record their history, or even pass it on to their offspring. Though they are (generally) more intelligent and intuitive than the “fleshy” races, their attention spans are lacking – this does not make them any less effective in combat, but has the effect of restricting their technology research (and any groundbreaking research is forgotten within a few generations).

The force that drives the Novakids is contained within the brand on their faces. Charged with huge amounts of energy, these pieces of metal generate the hard plasma “shells” which stop their constituent gases from leaking – if a Novakid is depleted of his or her vital gases, the energy contained within their brand is instantly vented into the very fabric of spacetime, leaving only a twisted metal symbol and a nearly undetectable warping of light around the area of death.

Since the Novakids have a short memory (and attention span), diplomatic relations can be strained at times; because of their completely different composition to other lifeforms, Novakids are sometimes unable to grasp the nuances of interracial social interactions, and have thus attained a slightly dubious reputation amongst other races. In particular, an Avian diplomat reportedly described a Novakid he met as “dense”, and elaborated upon his statement by mentioning that the Novakid in question had cheerily asked him if his god, Kluex, was real.

If we manage to hit $500,000 in pre-orders, this race will be added to the base game and will be playable upon release. They will also be fully integrated into the lore!

We’ll be using the extra money to pay for an additional artist to create their assets, so their creation won’t delay development at all.

A special thanks to all the wonderful community members involved in the creation of the Novakids!