A couple of the devs were completely indisposed today (Kyren moved to Orlando! (temporarily) )

so we decided to continue with our weekend work and work on core features through the coming Saturday instead.

The extra time allowed us to polish up the music system a little more. It now reads ABC files perfectly and has a range of instruments.

That said, I continued to make progress on the descriptions. Only the human set left now!

George has completed some wonderful work on the Hylotl villages.

Rho completed the art for a couple of NPCs

Legris is finishing up an intro

Omni is adding a ninja rope.

This coming week we’re going to take a whole bunch of systems and tie them together to create progression. It’s an exciting week!

A present from George in the form of a screenshot.

This is some of the Hylotl stuff he’s working on. It’ll be below the ocean when it’s finished. 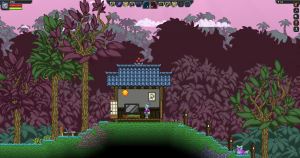