So Starbound’s next update is the big 1.0 and it’s getting close, so I wanted to update everyone on where things are and what to expect. Leaving Early Access doesn’t mean the end of updates for Starbound by any means, instead it will mark a shift away from engine work and towards additional content creation.

In the past we’ve referred to this update as ‘the story update’ and indeed the player will finally be able to experience the complete Starbound story arc. 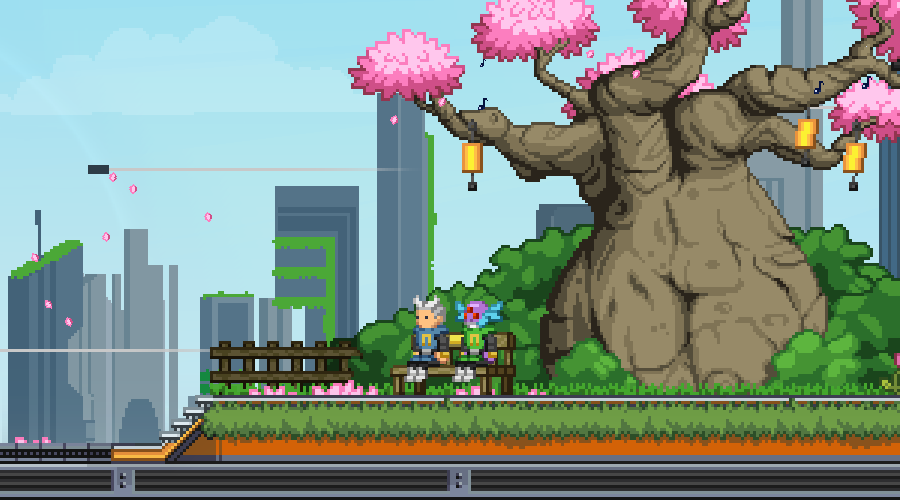 Along the way you’ll meet new friends, undertake a series of missions and search for clues across countless planets. The story arc isn’t intended to replace the sandbox gameplay, but instead provide it with context whilst leaving the game open and boundless.

So, let’s go over some of the big new and returning features in 1.0

You are a Protector in training. The protectors belong to the Terrene Protectorate. An organisation formed on earth by humanity to protect and guide the universe towards peace. The story begins on earth, on your graduation day and quickly has you hurtling out into the stars.

The story consists of 8 instanced missions that take the player from overrun mining facilities to ancient temples and sunken libraries. To unlock missions you’ll be given quests which utilize many different aspects of the Starbound sandbox to send you searching for clues. Clues can be found in many different ways, from visiting towns and talking to the locals, exploring dangerous dungeons, to building colonies and completing quests. Our goal is to reward however you like to play.

All of these missions (excluding the intro) end in a unique boss fight and meeting new friends that aid in the expansion of the outpost, which is now upgraded as you progress.

As of this update the mission/story progression, armor progression, ship progression and colony progression are all entirely separate. Whilst missions do increase in difficulty as they progress, it’s up to you how you want to tackle them in terms of gear, weapons and items. We’ve removed any artificial gates, though you will need to ensure you have the equipment needed to overcome any environmental hazards. 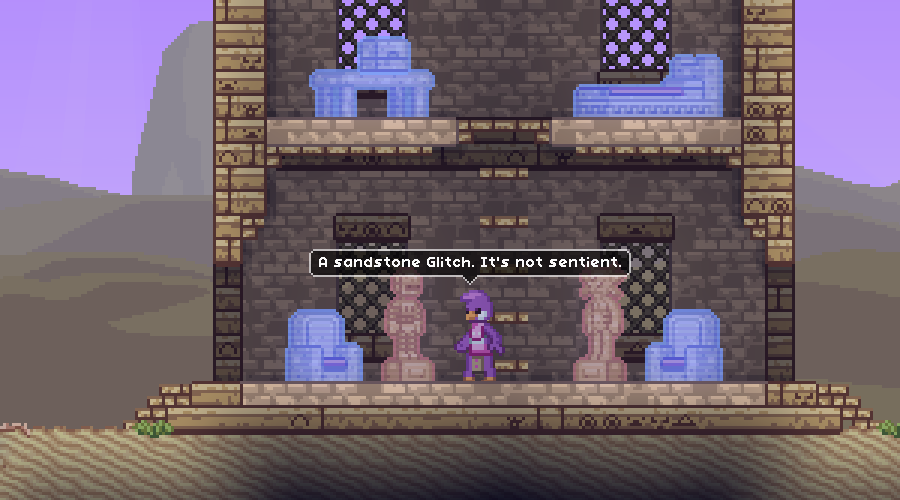 The lore and NPC dialogue has also been tweaked around this story and forms a cohesive narrative which ties the Starbound universe together.

Up until now, each planet in Starbound had one major biome, with some sub biomes scattered within it. With the goal of freeing up the progression and removing artificial gates in mind, planets now contain multiple major biomes, in interesting combinations. Planet generation feels new and fresh with many more possibilities for variation and interesting content. It’s now possible to find a volcano in a jungle or a ruined town in a desert. 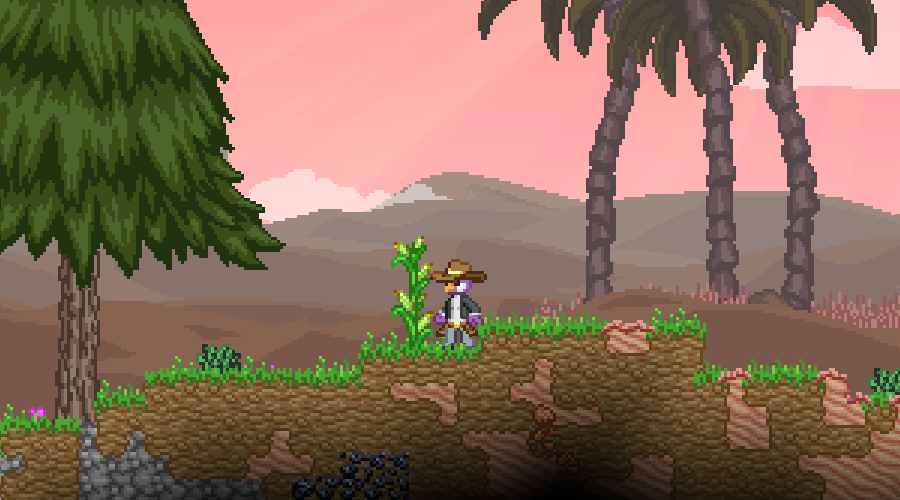 We’re also bringing these planets to life with great new dungeons, villages and beautiful microdungeons. Planets are populated with more content than ever and we’re making sure those dungeons contain rewards that are meaningful both to the story and to sandbox gameplay.

These new villages extend to every race, including the Hylotls who now have a complete set of dungeons and villages in game. 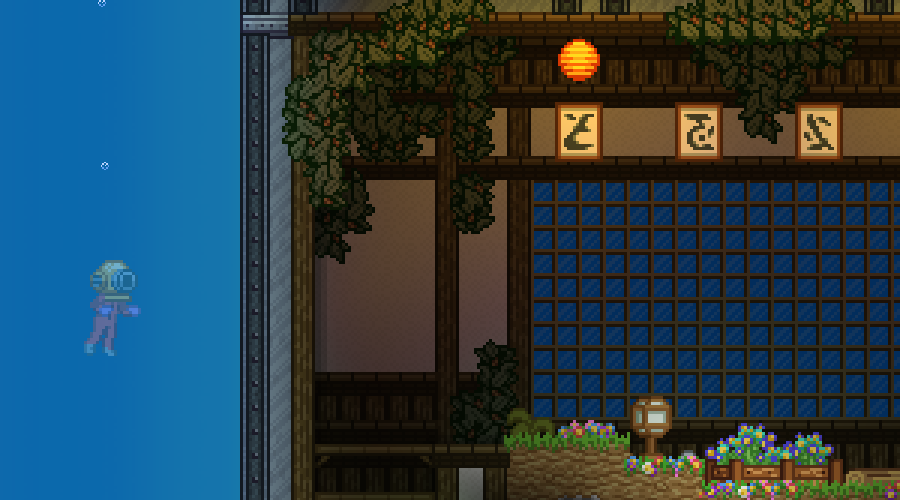 Alongside the story progression and clue quests there are a number of new side quests, including a battle arena, a museum that needs to be populated with artifacts, and test chambers to unlock tech upgrades. We’ve also expanded the quest system with a quest tracker, compass and multi-part quests which update as you undertake them. 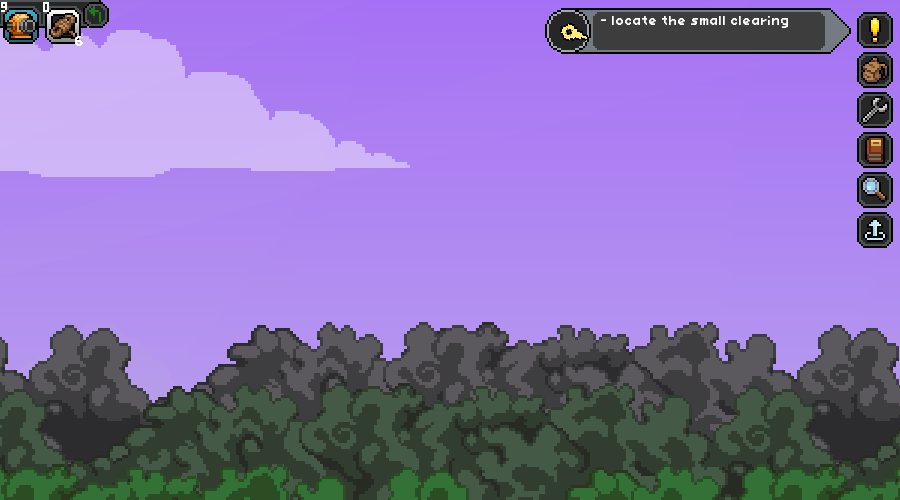 In order for a world to feel alive and cohesive it requires context. We’re establishing that with our new generated quest system. As you explore the stars, you’ll meet NPCs who need help in various ways. These NPCs will ask you to check out specific locations on their planets to complete their requests. Quests are generated in such a way that the NPCs are aware of the planet they’re on, the creatures that inhabit it and where other locations are in the world.

Completing these quests will grant you all sorts of different benefits and some can leave you with new friends. 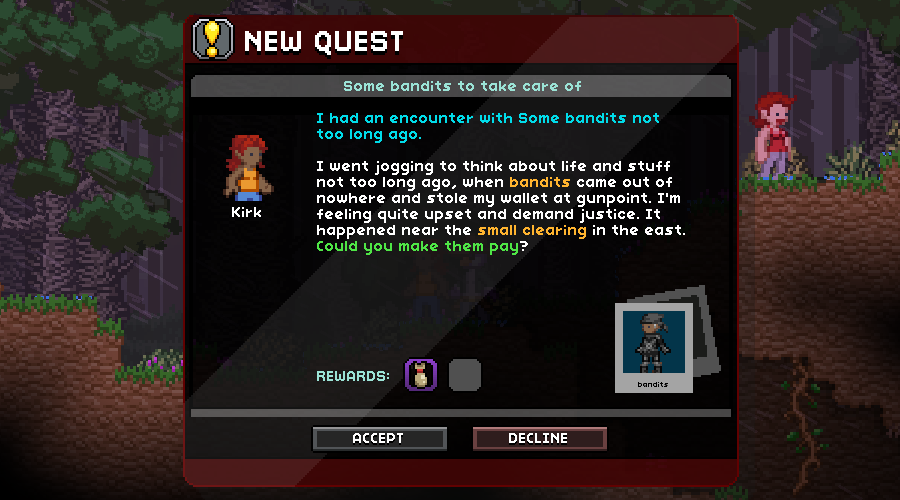 In order to reward players for creating colonies we’ve allowed particularly happy colonists to become crew members. If you accept their service they’ll beam to your ship, wear a uniform and fall under your command. Crew members are capable of fulfilling a number of different roles; Soldiers will fight alongside you, medics will heal you mid battle, mechanics will make your ship more fuel efficient and stylists can outfit your crew in custom uniforms.

Crew members can be picked up and dropped on your ship at any time, crew members that follow you will interact with the world around them, examining and commenting on objects they pass and sometimes interacting with them. 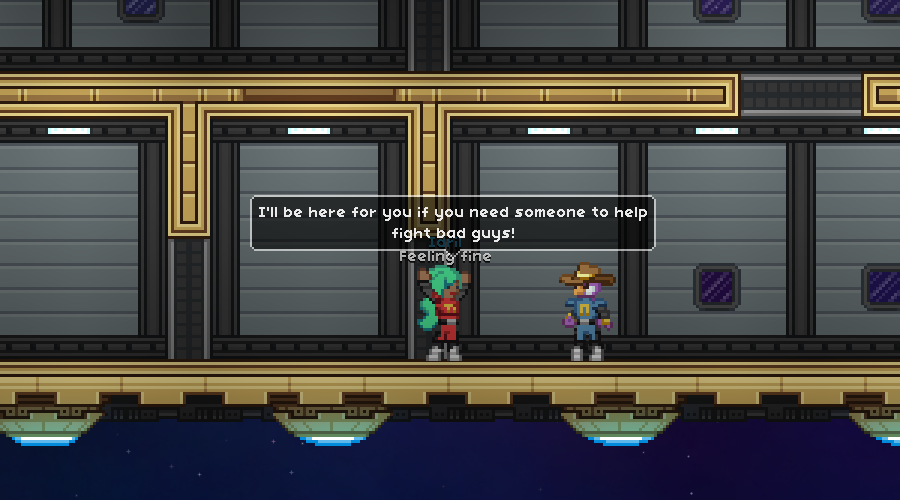 If building colonies isn’t your style you can always head to The Beakeasy and hire a penguin mercenary. These mercenaries will carry out the same roles as crew members but their assistance comes at a premium.

Ships are now upgraded by reaching a certain quota of crew members. Alternatively, if crew members aren’t your style, licenses to upgrade your ship can be bought on the black market at the Penguin Bay. Post 1.0 we’ll continue to look into the feasibility of entirely custom built ships. 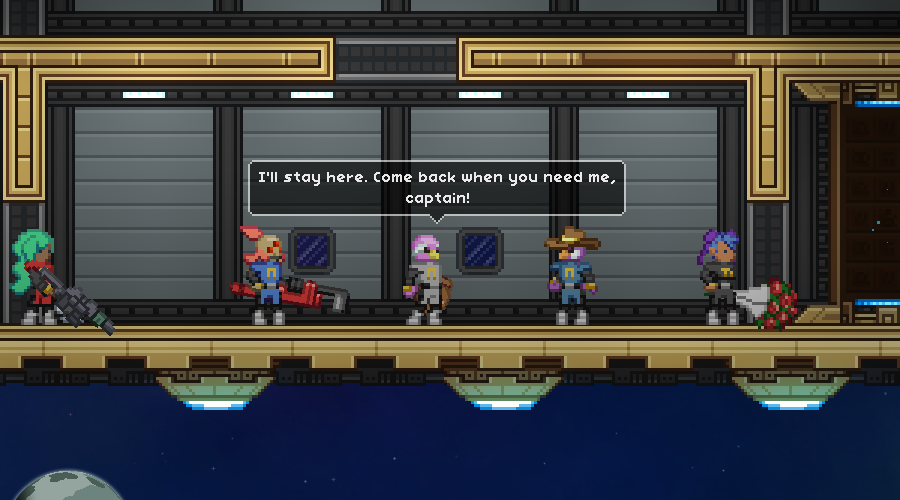 The crafting progression in Starbound has been completely revamped. There are many more crafting tables, each with tabs that specify categories of craftable items. Crafting recipes have become more meaningful and interesting with more thought behind what each of these recipes requires of the player. It’s easier than ever to find what you want, when you need it. Your pool of recipes advances more logically and the improved UI makes crafting less of a chore. 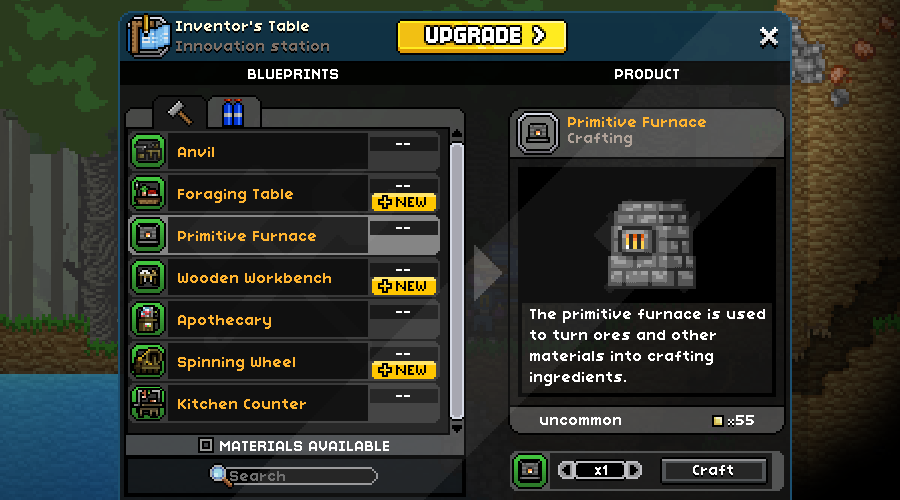 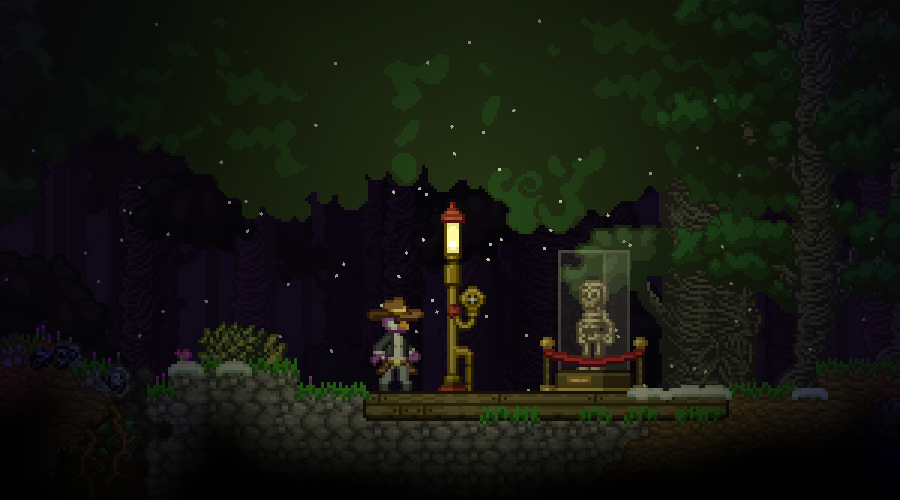 Hunger has been reworked and has returned in an optional survival mode. The UI has been revamped and food now rots over time (with refrigerators keeping food fresh). Eating food now also has a healing effect outside of survival mode.

There are a plethora of new, extremely unique weapons scattered all over the universe. These weapons make for good rewards, provide varied gameplay and many of them are built on backer requests.

The pet system has been massively improved, captured pets now appear in your inventory, the range of creatures you’re able to catch is much wider, the capture animations have been improved along with the pet behaviours. Pets can also be equipped with collars which provide them with special abilities and you’re able to craft healing and tether stations to heal and tether your pets to a location.

Similar to pet collars, armor augments can now be applied to certain back armors to give the player special properties. These range from increased damage and speed to fun special effects. 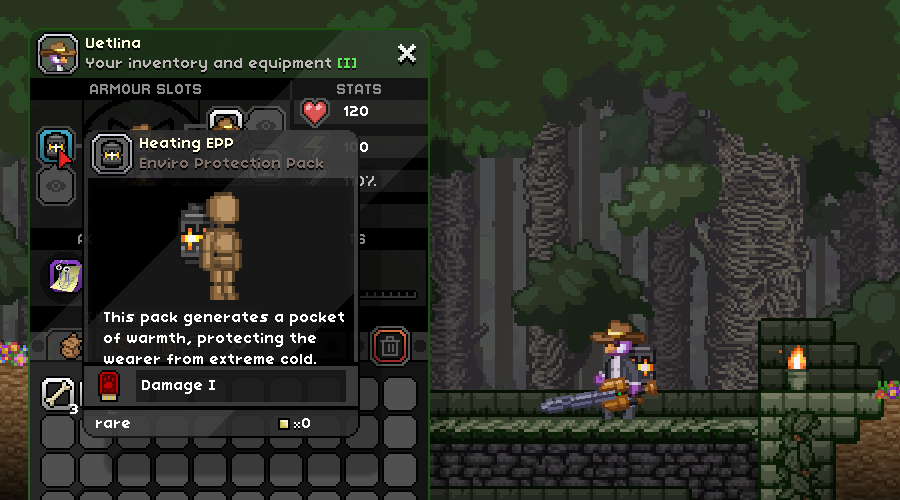 Combat continues to be updated and tweaked. We’ve continued to adjust the way damage works. When hurt the player now has increased invincibility frames. When a monster is hit by a player it’s unable to damage the player for a short period. Meaning you no longer have to worry about being hit by monsters caught in your special attacks. There are many small changes we’ve made here while we continue to work on balance. 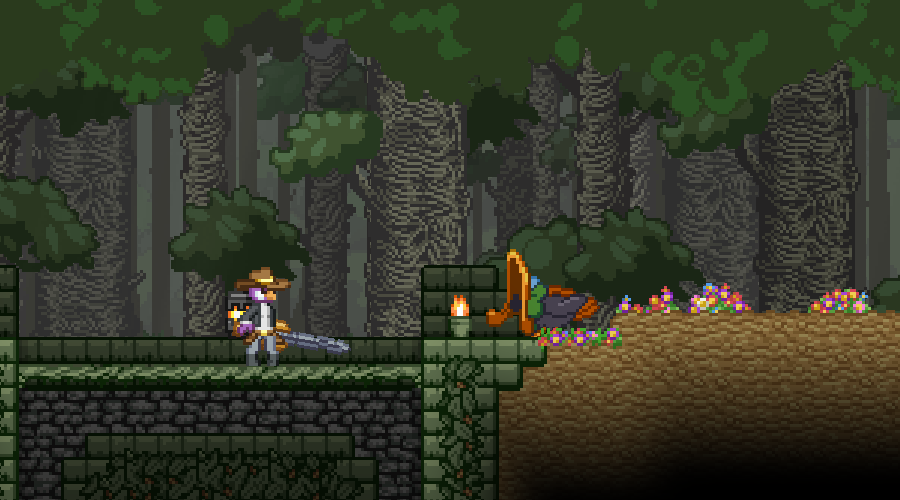 There are far, far too many things to mention here but the overall effect is one of a far more polished, finished experience. It touches every aspect of the game; code, sound, graphics, design are all included. We will be pushing a release candidate of Starbound to unstable some time before 1.0 whilst we continue to polish for the final release.

A New Style of Multiplayer

Multiplayer in Starbound has always been a bit technical to get off of the ground, requiring the player to set up a server, forward ports, share IPs and so on. We’re hoping to use Steam to massively streamline this process though there are still some technical hurdles we’re working through. Our goal is to create two kinds of multiplayer experiences.

We’re also looking at what security improvements we can make, though this is going to be a tough one with the degree to which Starbound is moddable.

Alongside Steam matchmaking we’re intending to make use of the steam workshop to support mod sharing and subscribing.

This is just a few of the features you’ll be seeing in 1.0 and as always we’ll be posting about development here.